Which is Better: Sculpting or Poly Modeling?

It is much easier and quicker. Moreover, the results aren’t very different either. So, it only makes sense to use sculpting over poly modeling. Or, at least, that’s how the basic perception goes for those who are new into animation.

In reality, both the techniques – although with their similarities – have distinction, pros, and cons, which make them more suited for select projects and outcomes that one desires. Also, to an extent, a lot also depends on the person’s preference.

What is Poly Modeling and Sculpting?

Generally put, poly modeling is used to set-up the models, owing to its precision of selecting individual components of the mesh. Things like weapons, machines and manufactured objects are ideally made using modeling. On the other hand, sculpting is used for making the details of the models, wherein the mesh is deformed, instead of interacted with, using sophisticated brush tools. Sculpting is ideal for creating organic shapes, like characters, clothing, and animals.

So, the question “Which is better: poly modeling or sculpting” falls quite invalid. They have their own use cases and nuances that one must understand thoroughly for efficient decision-making in the animation pipeline. Usually, to produce a quality outcome in the project, a good professional would use the combination of the two.

When to Use Poly Modeling and Sculpting?

In certain cases, modeling is almost inevitable. For instance, if your mesh is more complex, you would need modeling to create a superior quality topology so the mesh animates adequately. Sculpting is called for if your characters require life-like textures. It can be used either at the start to plan a base shape of a model or at the end to add fine details to the model to create accurate triangulated surfaces. 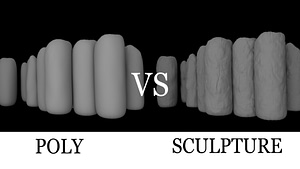 When you’re learning animation, you would be taught both. However, you can choose to specialize or focus on one over the other. Furthermore, if you’re working in a team, you would have different experts working together to produce the desired result; some would be better at sculpting, others would have mastered poly modeling.

In the end, it all comes down to what you’re trying to achieve. If you’re a one-person team who is producing an animation video for basic purposes, you would likely choose sculpting. It is relatively easier and saves time. However, if you have a team that’s working on a client’s project, you’re going to have to use poly modeling, whenever it’s needed, for more finesse results.

So, “poly modeling or sculpting: which one is better” is a wrong question. Both are great. And owing to their unique dynamics, they both are essential in certain cases.

About the blogger – The blogger holds an Engineering degree and has an experience of working with various technologies with medium to large enterprises. Creativity and love for animation is her passion.